skip to main | skip to sidebar

Wi Mitzwha for a robber

For the Sausage Factory: Various Health Care Proposals as Fodder for Compromise

Even in the midst of the presidential campaign, we should remember that there are a number of health care plans other than those proposed by McCain or Obama. Given the vagaries of politics, any given plan is very unlikely to be passed. Thus we should become familiar with the details of a variety of them, since any compromise will look like a hybrid.

Needed renovations, or setting the roof on fire? 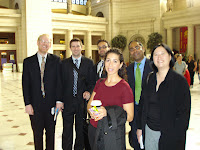 Our exposure to health care policy - as part of our primary care curriculum - ran the gamut recently.

Last week we went to Washington to advocate for increased support for the primary care workforce. (In brief: we need more primary care health care providers. There aren't going to be enough of them, especially if we start covering the uninsured. We need to create incentives to help people choose to go into primary care rather than the oversubscribed and overpaid subspecialties.) We spoke to young, fresh-faced, intelligent, and hyperinformed health care staffers of some of the Capitol's most influential senators - they were genuinely friendly and happy to see us. One senator's office is working on a creative idea left over (so they said) from Hillarycare, a "foundation" to ensure a funding stream for primary care education, training, and loan repayment, paid for by a tax on insurance companies. Of course, no one in the room disagreed with that. Everyone realizes that primary care training needs to be dissociated from the current system, private insurance companies and hospitals included. (Our very friendly lobbyist, paid for by NYU Medical Center and along with us to make sure we didn't say anything stupid, was not very excited to hear about this idea.)

This week (thanks to a colleague of mine, whose father is a fundraiser for the senator in question) we went to the office of the junior senator from New York. We spoke to her for fifteen minutes about the necessity to improve funding for the primary care workforce - she was impressively informed, realistic about the political obstacles, and . . . oh, who am I kidding? We were giddy. We got a picture, too!

On Friday, we visited Jack Resnick, an internist (let's say it: a primary care doctor!) with a practice on Roosevelt Island. "[In Washington,] they're talking about payment reform, which is . . . pffphpht! You have to tear out the guts!" By which he means - you have to alter the incentives so as to drastically reduce hospitalization. It's an open secret that hospitals are not the best places for sick people. They breed infections, deconditioning, delirium, psychosis. Resnick's approach (and the approach of this organization) is to closely monitor the chronically ill patients in his practice, keeping the hospitals at bay by providing patients sophisticated but sensitive care at home. It's more feasible for Resnick because (a) he lives on an island; (b) he's ready to devote himself nearly 24-7 to his patients. But this, he says, is the wave of the future - money saving, intensive, personal primary care for the elderly and chronically ill, taking away money from hospitals where it's not usefully spent (or, rather, uselessly overspent).

Resnick, and the AAHCP (see the link above), are behind the Independence at Home Act, a bill introduced in September which would experiment with cash rewards for house-call physicians that trim Medicare outlays for high-cost patients with multiple chronic conditions.

[revised per comments]
Email ThisBlogThis!Share to TwitterShare to FacebookShare to Pinterest
Posted by שלום בערגער Zackary Berger at 8:09 PM 2 comments

Home for the holidays

I was eating a stale Danish in NYU Medical Center's sukkah this morning. On the wall, a notice painstakingly informing the sukkah user that the hut was built by heymishe yidn, the term used by Yiddish-speaking Chasidim to refer to themselves. (The English and Hebrew notices didn't include this fact, by the way.)

But what's this hanging from the ceiling? A red and gold plastic ribbon with a golden bell?

In the heimische sukkah, a heimische Christmas decoration!
Email ThisBlogThis!Share to TwitterShare to FacebookShare to Pinterest
Posted by שלום בערגער Zackary Berger at 12:42 PM 1 comments

Yiddish poems of home life: my translations of poems by Gella Schweid Fishman and Gitl Schaechter-Viswanath (taken from an upcoming anthology) in Words Without Borders.
Email ThisBlogThis!Share to TwitterShare to FacebookShare to Pinterest
Posted by שלום בערגער Zackary Berger at 11:38 PM 0 comments

To Albany today with my fun-loving primary-care colleagues to advocate for streamlined consent for HIV testing - to make sure all New Yorkers get HIV diagnosis and necessary treatment as early as possible.
Everyone was nice and I didn't trip over the furniture.
Enjoy our position paper here. Spread the word!
Email ThisBlogThis!Share to TwitterShare to FacebookShare to Pinterest
Posted by שלום בערגער Zackary Berger at 11:24 PM 0 comments

In Which a Kesher Israel Member Waxes Ecumenical

Not in the Same Breath: A Yiddish & English Book of Poetry

Di Kats der Payats - The Cat in the Hat in Yiddish

Available from the Bibliothèque Medem, Paris